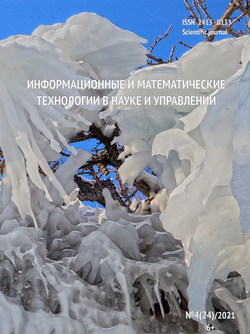 The article analyzes a number of publications on this topic, and also summarizes the results of discussions at the conference "Knowledge, Ontology, Theory" (Novosibirsk, November 8-12, 2021) and the Round Table at the ISEM SB RAS "Artificial Intelligence in Energy" (December 22 2021). The concepts are considered: artificial general intelligence (AGI), strong and narrow AI (NAI), explainable AI, trustworthy AI. The reasons for the "hype" around machine learning and its disadvantages are analyzed. Compares cloud and edge computing technologies. The concept of "smart" digital twin, which integrates mathematical, informational, ontological models and AI technologies, is defined. The ethical risks of AI and the prospects for the application of AI methods and technologies in the energy sector are considered.

The article considers the problems of automation and intellectual support of the mathematical and simulation modeling process of complex objects via a combination of component-based and ontological approaches. As the main application area for the discussed methods and tools, it is proposed to use the integrated environmental modeling domain. In this context, modern approaches to the automation of component-based modeling are considered. To couple model components into a final complex model, the developer needs not only to ensure formal agreement with the standards of the modeling framework but also to take into account various types of semantic and syntactic heterogeneity of components. In this regard, the classification of the integration types for complex modeling is carried out, the related implementation features in the author's platform for creating knowledge-based systems are discussed. The hydrologicalecological balance model is considered an illustrative example.

The article discusses the possibilities of applying semantic modeling, including, in particular, ontological and cognitive modeling to support joint research of energy and socio-ecological systems. The work is devoted to the use of ontological engineering for structuring knowledge of subject areas and cognitive modeling in studies of the impact of the functioning of energy facilities on the natural environment and humans. Ontological modeling is used to identify, describe and coordinate the basic concepts of subject areas of research and allows you to systematize and visualize the relationship between elements of the natural environment, energy facilities and their characteristics, impact factors and methods of their calculation. Cognitive modeling is used to identify the structure of causal relationships between factors affecting the stability of the system.

A hybrid mathematical model for the Knudsen numbers 8 ⋅ 10−3 −7 ⋅ 10−2 for the carrier gas has been developed to simulate processes in a low pressure RF plasma with gas flow. The model includes an initial boundary value problem for the kinetic Boltzmann equation describing the distribution function of the carrier neutral gas, boundary value problems for the continuity equation of the electronic, ionic and metastable components, the electron energy conservation equations, for Maxwell’s RF equations in the form of telegraphic equations and the Poisson equation for the potential part of field. The results of the calculation of the electric intensity, the concentration of electrons, iоnes and metastables, the potential component of the electromagnetic field in a cylindrical vacuum chamber are presented

The paper presents an approach to the development of an information-analytical system that helps a researcher to solve compute-intensive problems of mathematical physics on supercomputers. The system automatically builds a scheme for solving the problem according to the user's specification entered by him in the dialogue mode. The scheme includes the most suitable mathematical models for solving the problem, numerical methods, algorithms and parallel architectures, links to available fragments of parallel code that the user can use when developing their own code. The construction of the scheme is carried out on the basis of the ontology of the problem area "Solving compute-intensive problems of mathematical physics", the ontology of a given subject area and expert rules built using the Semantic Web technology

The paper deals with specialized computing technology and algorithms used for finding lowpotential atomic-molecular clusters. The performed computational experiments demonstrated a rather high competitiveness of the new algorithms in comparison with the classical methods for the considerable functions. Using the developed software, the applied problem of molecular docking was solved. Using the developed software package, record results for optimization of atomic-molecular Morse clusters of large dimensions have been obtained

The relevance of the presented development is due to the need to create a device to read and process information from an experimental array of solar panels. The purpose of the array is to obtain reliable data for the verification of models for estimating photovoltaic power potential indicators used in justifying the feasibility of the adoption of solar power plants in the eastern regions of Russia. We present a description of the main and auxiliary equipment of the experimental array. The array's solar panels are arranged in different ways so as to determine the most efficient tilt angle and justify the need to use a sun tracking system. The proprietary device based on the Arduino microcontroller was designed to read and write the value of instantaneous power of solar panels. To monitor the readings of the amperage, a shunt ammeter is used, which is connected to the gap of the power circuit. The study provides a diagram of the current meter and describe its operation. We outlined the main stages of subsequent data processing.

The article presents an adaptation of the legacy systems reengineering technique. An overview of approaches to reengineering is given. Although the term “reengineering” primarily refers to changing business processes, it is well suited to software development. The necessity of adapting the method has been substantiated. The article describes the application of the described methodology on the example of software complex reengineering for predictive research of the fuel and energy complex. A historical overview of the current problem is given and all stages of INTEC PC reengineering are described step by step

The article discusses approaches to the design and implementation of individual components of instrumental tools for semantic analysis of information on scientific and technological solutions in the field of energy. This information has already been placed open sources. The structure of billinguistic ontology is considered, which makes it possible to solve the task of classifying information, taking into account its submission in various languages and synonyms. The authors reviewed the approach to the search and processing of information from open sources based on the use of semantic analysis developed by authors, the implementation of which was performed on Python using the Natural Language Toolkit library.

The article discusses the problem of adapting the educational program of training IT specialists to solving complex engineering and, at the same time, creative problems associated with the development of data journalism. Open government data on the health care system is used as a source of big data. The article proposes the main provisions of the approach to project training, formed on the standards of project and system engineering activities, as well as on the principles of conducting hackathons, where the main priority is the intellectual component of the team's work and its ideas. Some results of the use of project-based learning in the interaction of students - future IT developers with journalists and data researchers are presented. The proposed approach and the results of project training obtained on its basis can be used to create guidelines for the development of joint interdisciplinary educational programs that combine the field of training future IT specialists and data journalists.

The purpose of the article is to substantiate the effectiveness of the stage-by-stage monitoring of students' progress using information and communication technologies. The relevance of the topic is due to the fact that an important issue of modern education is the development of a system for monitoring the quality of the educational process in universities. The main method is monitoring, which can improve the state of the educational process through problems and purposeful work. The article uses the implementation of step-by-step monitoring with the use of information and communication technologies in the classroom, conducted with information technology. Based on the results of the research, conclusions were drawn about the stage-by-stage monitoring in the classroom, aimed at managing the audience, developing educational work and an impartial assessment of students' progress.