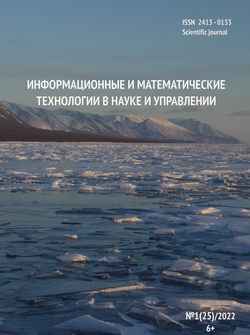 The paper proposes approximate variational principles for the classical thermal explosion problem and its modifications (including cases where the high activation energy approximation does not hold). Variational problems are solved using a one-parameter test function and the Ritz method (for polynomial approximation of the solution). The results of the calculations make it possible to determine the dependence of the critical conditions on the parameters of the problem: the intensity of heat transfer at the inner boundary, forced convection, and viscous dissipation.

The article presents a conceptual scheme for monitoring and formalizing the control action on the technical state of a complex system using an anaerobic bioreactor as an example. The mathematical apparatus and the algorithmic support that implements it are presented as the basis for the synthesis of an intelligent process control system at enterprises. Examples of analytical synthesis of an adaptive control system for a non-linear multidimensional object and an algorithm for the observer of an unmeasured variable are given.

The article presents self-consistent models used at various stages of development of
powerful sources of electromagnetic radiation - gyrotrons. Methods for solving them are
presented, implemented in the ANGEL software package, which allows determining the
characteristics of the electrodynamic system, calculating the starting currents and the
efficiency of the electron-wave interaction.

The aim of the study is to improve the efficiency of the functioning of mobile
object tracking algorithms (CSP targets) in distributed sensor networks as part of cyberphysical systems based on the organization of their interaction with initialization/routing algorithms. The task of localizing and tracking objects of intrusion into the protected zone is the basis of the protection system for critical objects. Tracking multiple targets with a wireless sensor network is a hot topic. Its successful solution by means of sensor networks involves solving a number of problems, among which there are two main ones that determine the successful operation of sensor networks. The first is the availability of effective methods of information exchange between local nodes, the second is the organization of joint signal processing (CSP) by a group of nodes based on the collected information about the state of the environment in their area of responsibility as a result of the occurrence of certain events. The problem of detection, localization and tracking of one target in the protected zone is accepted as a model example. This example discusses the main ideas underlying the integration of algorithms, as well as the main aspects of the implementation of detection, localization and tracking algorithms. The proposed solutions take into account the limitations associated with the capabilities of local nodes, the network as a whole and routing. The source of data for the proposed algorithms are signals from sound, seismic, thermal, etc. sensors, in which the signal power has a pronounced maximum depending on the distance from the target to the network node. The results obtained extend to the problem of tracking multiple targets, which involves assessing the applicability of identification and classification methods in conditions where there is an overlap of perceived signals by sensors. The architecture of a system for joint data processing in distributed sensor networks is considered. The subject of consideration are methods for tracking a plurality of moving objects in a protected area. The main steps in the tracking procedure consist of: target detection, target classification, location estimates, and target movement trajectory prediction. Algorithms for solving these problems are discussed.

An intelligent information technology for situational modelling of industrial-natural complexes (INCs) of various scales for the purpose of strategic and operative management of them, focused on complex processing of heterogeneous information regarding static and dynamic characteristics of such systems, is considered. The relevance of this task results from the following: complication and interpenetration of INCs; growth of uncertainties in the world due to acceleration of INCs development; increasing data availability due to the birth of the Internet of Things. The novelty of the proposed approach lies in integration of means for studying poorformalised complex non-stationary spatial objects within the framework of cause-and-effect models and integrated usage of expert knowledge to form criteria and select preferable options for implementing INCs structure, which are studied in more detail in a simulation mode with using digital twins of INCs components.

The article is devoted to the development of a digital twin (DT) of a wind farm. A review of existing solutions in this area is made. The approach to the construction of DT, based on ontological engineering, is considered in detail. The main steps of ontological engineering are described. A fragment of the system of ontologies of wind systems is given. A mathematical model for determining the operation parameters of a wind power plant, used in the construction of DT, is considered. The article also focuses on the design of a DT architecture, including a digital shadow, a digital model, and a control system. Also in the article is the stage of implementation of the prototype DT wind farm.

The article presents the implementation of an autoregressive model for predicting solar radiation data. An experiment was carried out with some approaches to data imputation and the choice of the MICE (Multiple Imputation by Chained Equation) approach was justified. A comparative experiment was also carried out for predicting solar radiation based on initial data and based on data in which imputation was applied.

The article is devoted to the results of the analysis of modern trends in functional programming, considered as a meta-paradigm for solving the problems of organizing parallel computing and multi-threaded programs for multi-processor complexes and distributed systems. Taking into account the multi-paradigm nature of parallel programming languages, here we used the results of paradigm analysis, which made it possible to find out a number of features and predict the course of the processes of using programs, as well as their study and development. There is reason to believe that functional programming can improve the performance of programs by preparing their prototypes in advance. A description of the semantic (universality, self-applicability, equality of parameters) and pragmatic (flexibility of constraints, immutability of data, rigor of the result) principles of functional programming is given, as well as the consequences of these principles aimed at reducing labor intensity and improving the technology of prototyping and debugging programs (constructiveness, verification, factorization, continuity of processes, reversibility of actions). The role of paradigmatic decomposition of programs in the technology of developing long-lived programs, which are often parallel computation programs, is noted. The perspective of functional programming as an auxiliary universal meta-paradigm for solving complex and important problems, burdened with difficult to verify and poorly compatible requirements of efficiency, reliability, safety and improvement opportunity, is especially emphasized. A variety of paradigmatic characteristics inherent in the preparation and debugging of long-lived parallel computing programs are shown.

In this paper, we proposed a methodology for the mathematical modeling of the movement of trains at railway junctions. It is based on the use of queueing networks of a special type. Sections of the railway network are important for cargo and passenger transportation, as well as international economic interaction. Therefore, their study is an urgent task. We use queuing networks, which allow us to take into account the influence of random factors on the operation of nodes and display the structural features of a particular object in the model. One of the large sections of the Trans-Siberian Railway sections was selected for testing the methodology. In the article, we built the model of its operation in the form of a queuing network with two incoming flows of applications and perform its numerical study. Then we used the results to determine the maximum allowable load and "bottlenecks" in the structure of the transport system and develop recommendations for increasing its throughput.